The Economist has recently made a visualization showing the alternative reality constructed by the Kremlin’s media through the lens of a Russian citizen who is surrounded by this reality on any given day. The Russian authorities have indeed supercharged their repression of independent media and their pro-war propaganda following February 24. But state-controlled highly manipulative media ecosystems are not unique to Russia, not even within Europe.

While authoritarianism in Hungary is not as developed as in Russia, Hungary has seen one of the steepest declines in media freedom over the past decade, characterized by the surveillance of independent journalists, widespread taxpayer-funded propaganda campaigns, as well as the gradual buyout of struggling independent outlets and the concentration of more than 77 percent (in terms of income) of the news-focused media in pro-Fidesz groups such as KESMA, a conglomerate controlled and directed by the government that owns more than 500 media outlets.

The following is a day through the lens of a Hungarian citizen exposed to this.

It is May 6, 2022. You wake up in your apartment somewhere in an Eastern Hungarian town. You empty your mailbox where — courtesy of KESMA’s leading company, Mediaworks whose affiliate oversees the distribution of daily newspapers — you find Magyar Nemzet, a pro-Fidesz daily. 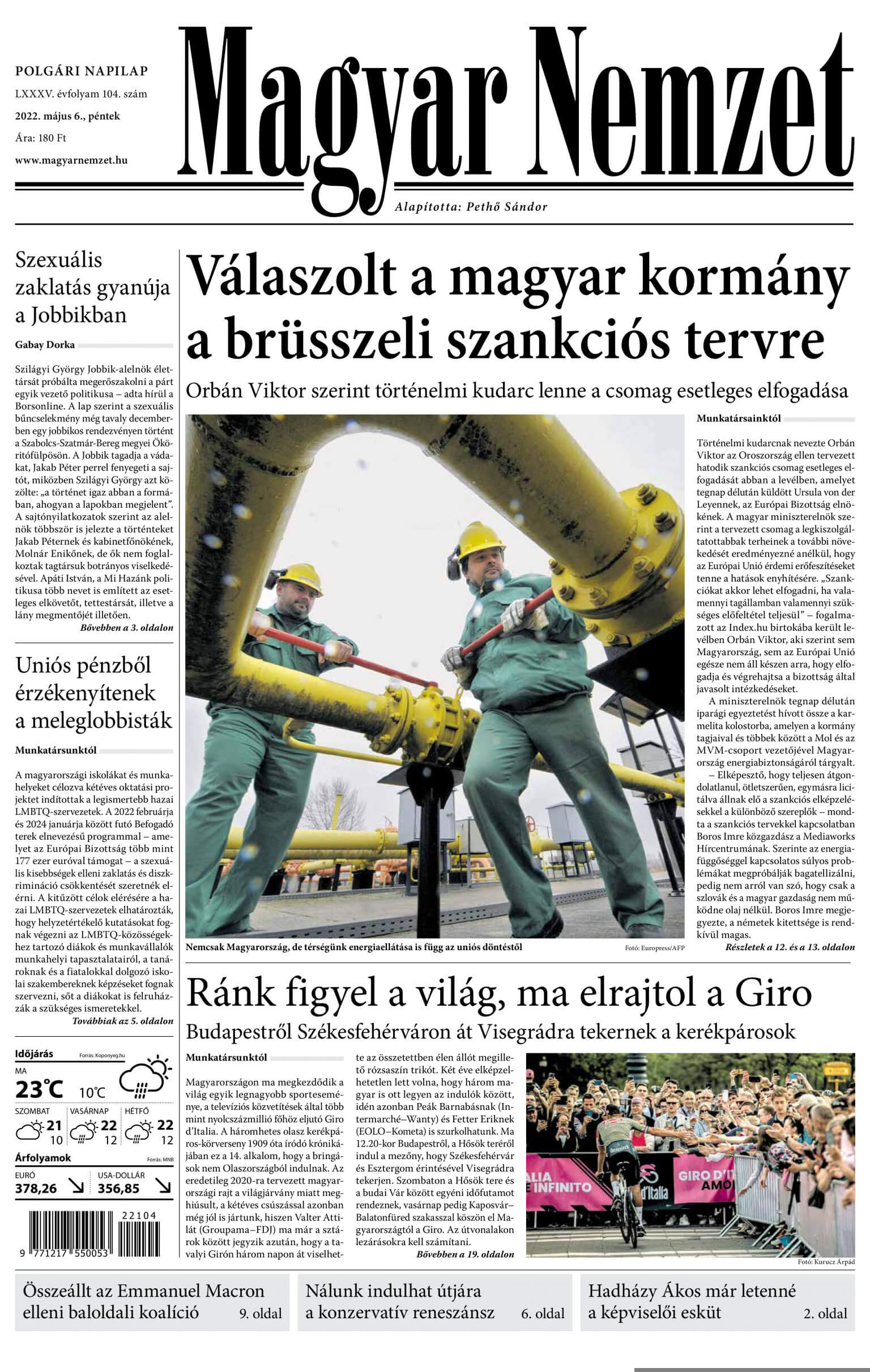 From the front page, you learn that “Brussels” had a “sanctions plan”, which the Hungarian government “answered”. From a glance at the article, you learn that whatever the plan was, Viktor Orban called it “a historical failure”. The sanctions would put further burdens on “the most vulnerable”.

An economist quoted on the front page agrees with the prime minister: “It is astonishing that various actors are coming up with these sanctions ideas completely randomly, without thinking them through, as if trying to outbid each other.” Those Brussels bureaucrats are at it again! Unsurprising, given how many vile things you have heard over the past six-seven years from the television and from billboards.

Your eye wanders over to the left, where a short piece lets you know that “gay lobbyists” are targeting Hungarian schools and workplaces to “sensitize” them. And all this is financed by the European Commission! Wait, have we not just voted against these malicious practices?

You leave your apartment shaking your head. As you drive to work, you turn on the radio. It’s a Friday, so Viktor Orban is being interviewed by the always friendly Katalin Nagy on Hungary’s public radio. The prime minister is busy explaining the situation in the European Council: a group of zealous fools, eager to hurt themselves, faced by one brave country and one brave man fighting for the livelihood of Hungarians:

As you walk into your workplace, you glance over the county paper that someone left on a table.

It could really be any county paper. All are owned by KESMA, and their political content is centrally edited. The paper, though, opens with local news coming from places familiar to you, which you care about. You pick up it up. 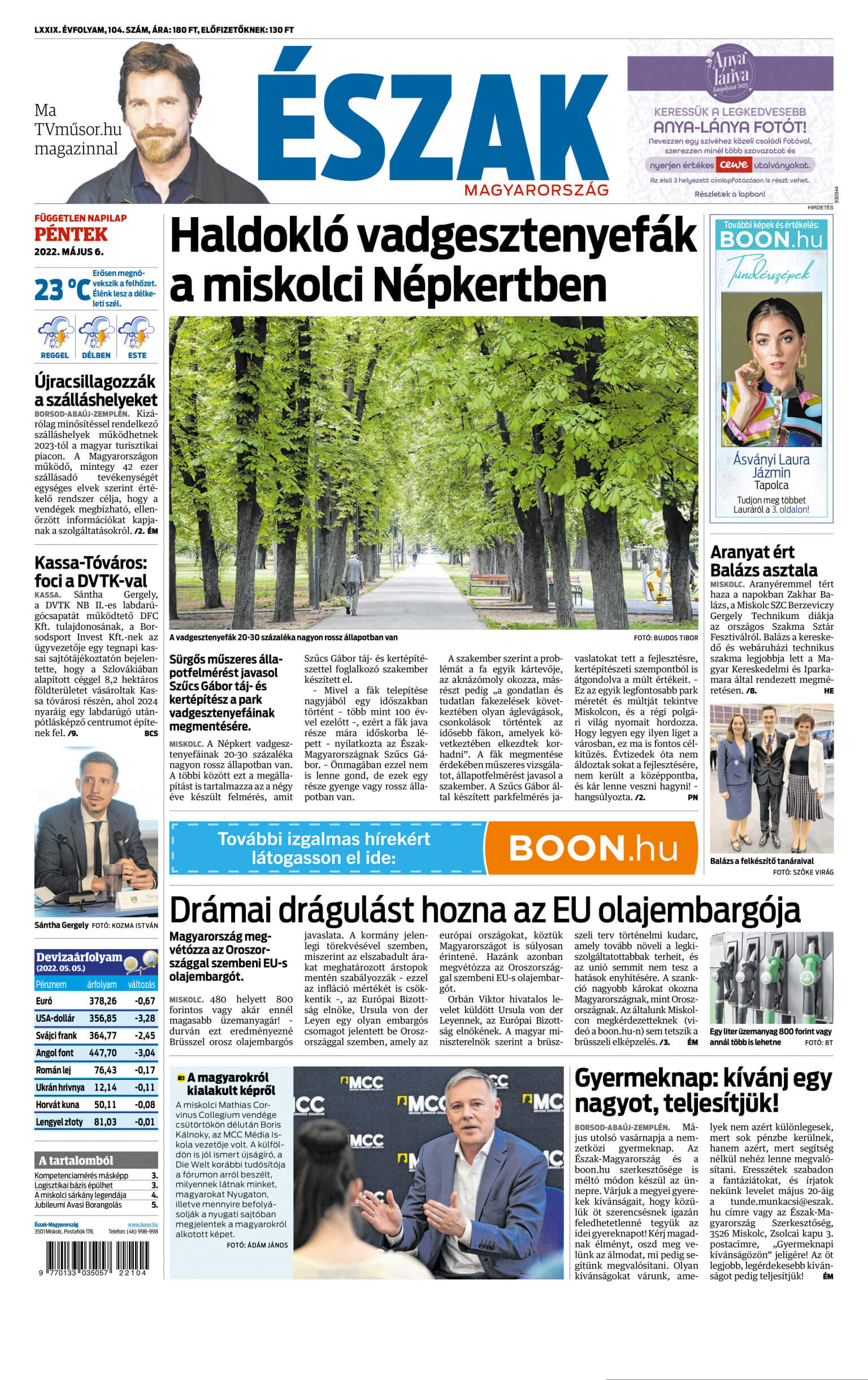 Below the fold, however, you are again informed that “the EU’s oil embargo would lead to dramatic inflation”. The article sharply contrasts “Brussels’s plan”, which would almost double fuel prices, with the government’s price caps. The article assures you that people they asked in the county seat dislike “Brussels’s idea”

But why don’t these people in “Brussels” — you struggle even to picture the city, let alone the grey-suited bureaucrats who wish Hungary ill — understand our point? Boris Kalnoky, an Orban-friendly former correspondent of Die Welt and now the head of the Media School of MCC, a policy school generously funded by Orban’s government, comes to your rescue: he happened to give a talk at the county seat to explain how “Western media” influences “how Hungarians are seen in the West”.

Before you can read further, you are called back to work. In the slower afternoon hours, however, you scroll through your Facebook feed. Since Fidesz made a concerted effort to pull together pro-Orban influencers on social media and these started notably increasing their promotion budgets, you have started seeing significantly more of their posts in your feed. You don’t mind it: their pronouncements usually align with what you and your friends think about the world. It’s also good to vent: the war, inflation and the pandemic you lost your uncle in have made life stressful, though it’s good to know that others with more hapless governments have it worse. 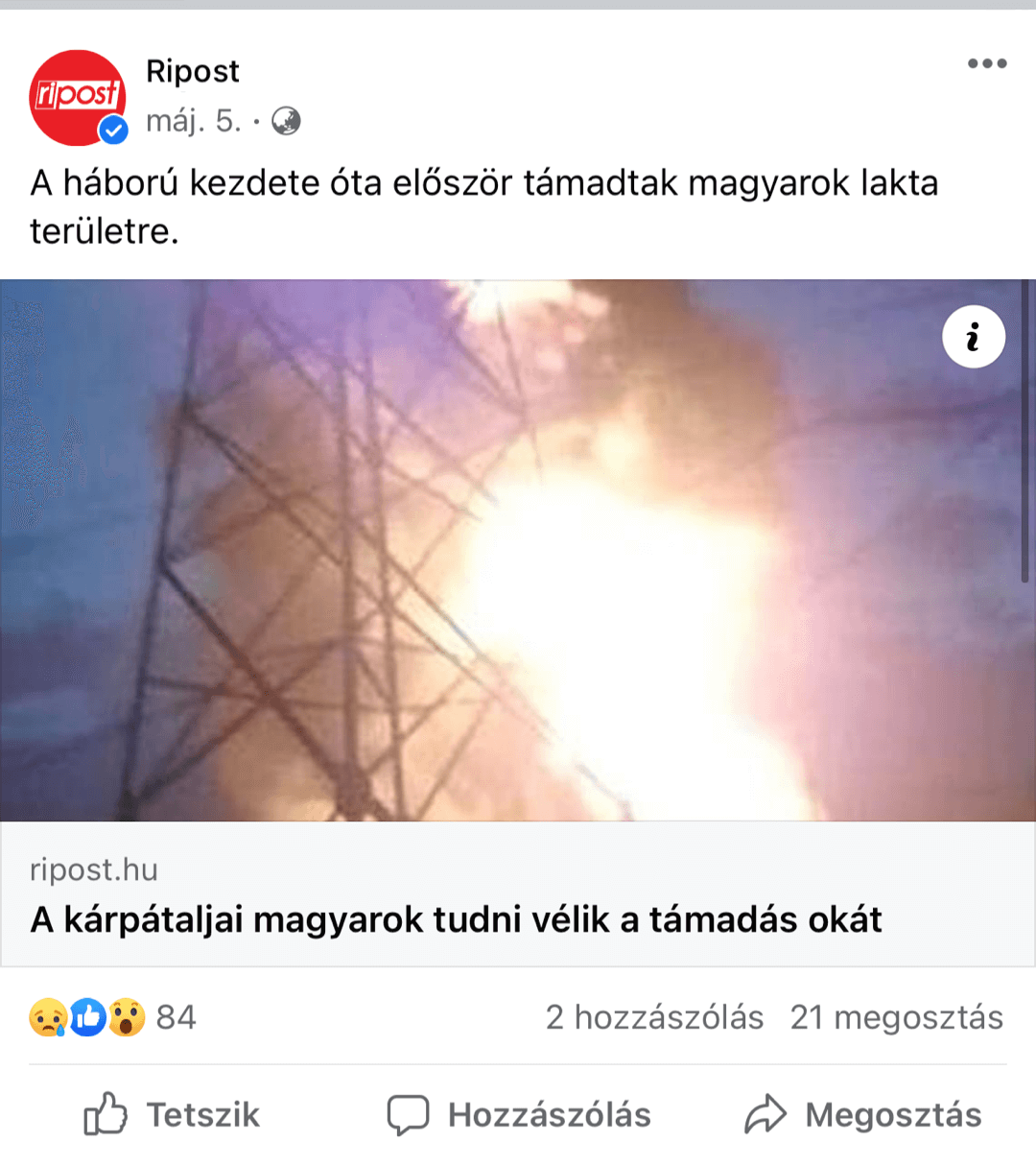 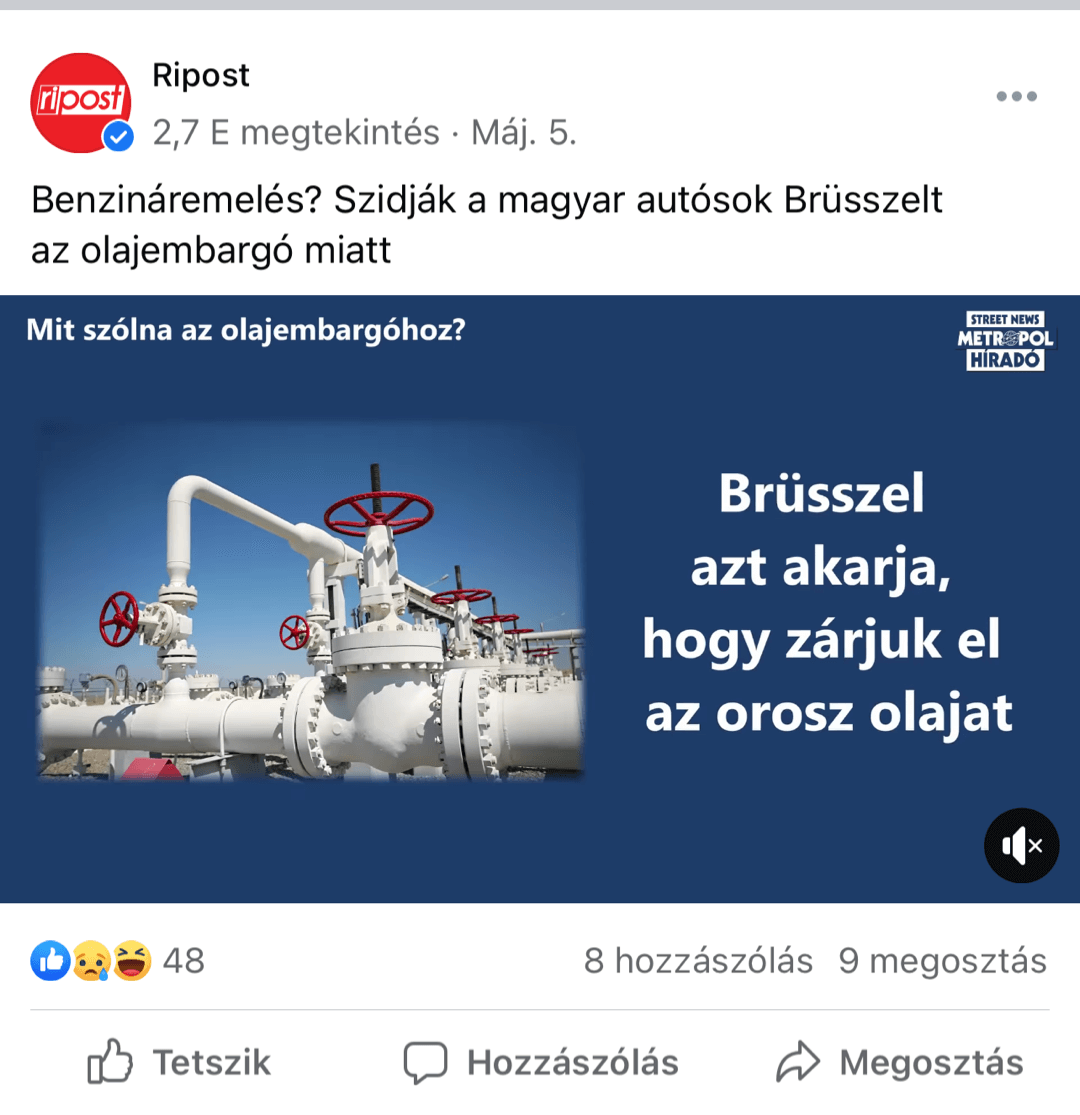 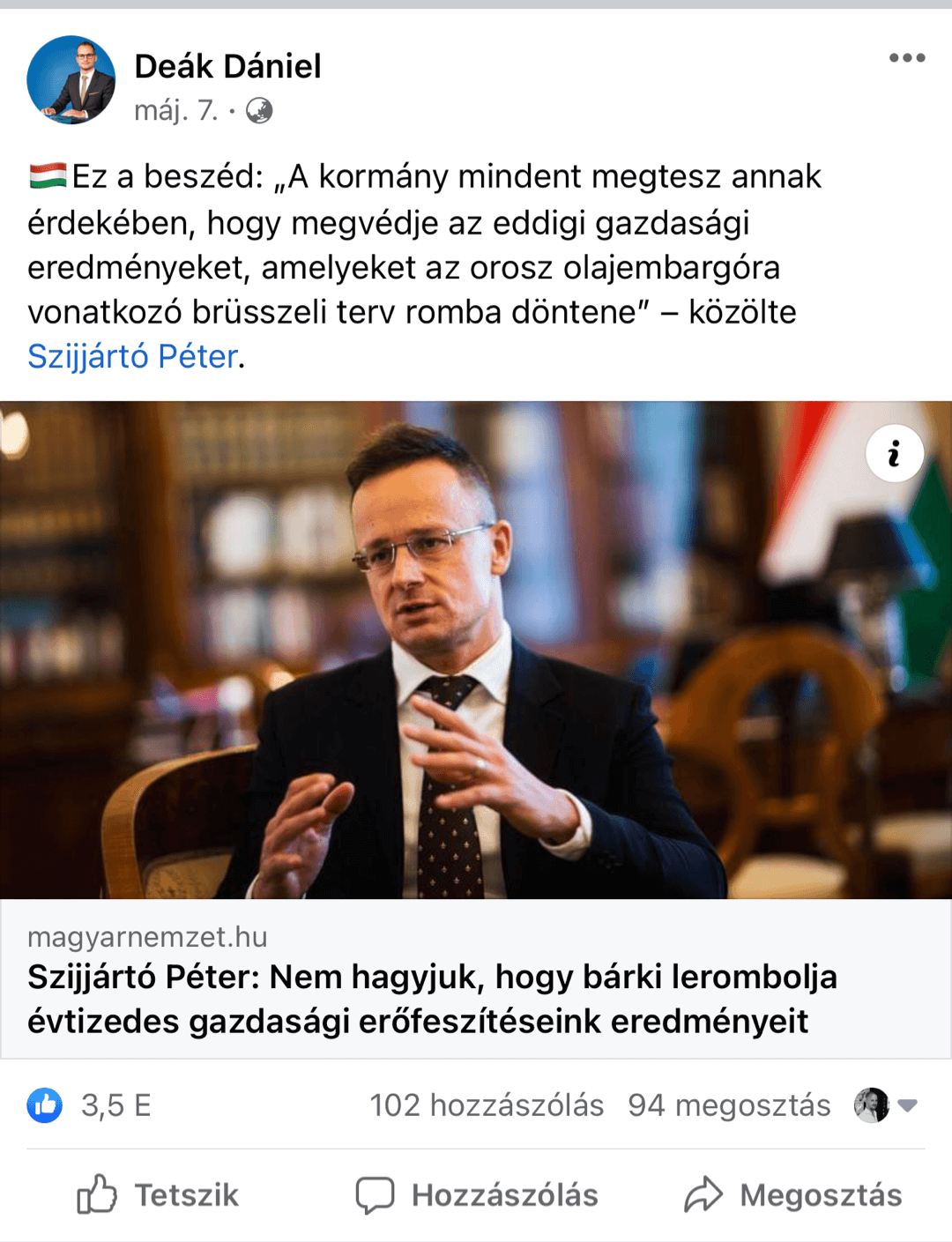 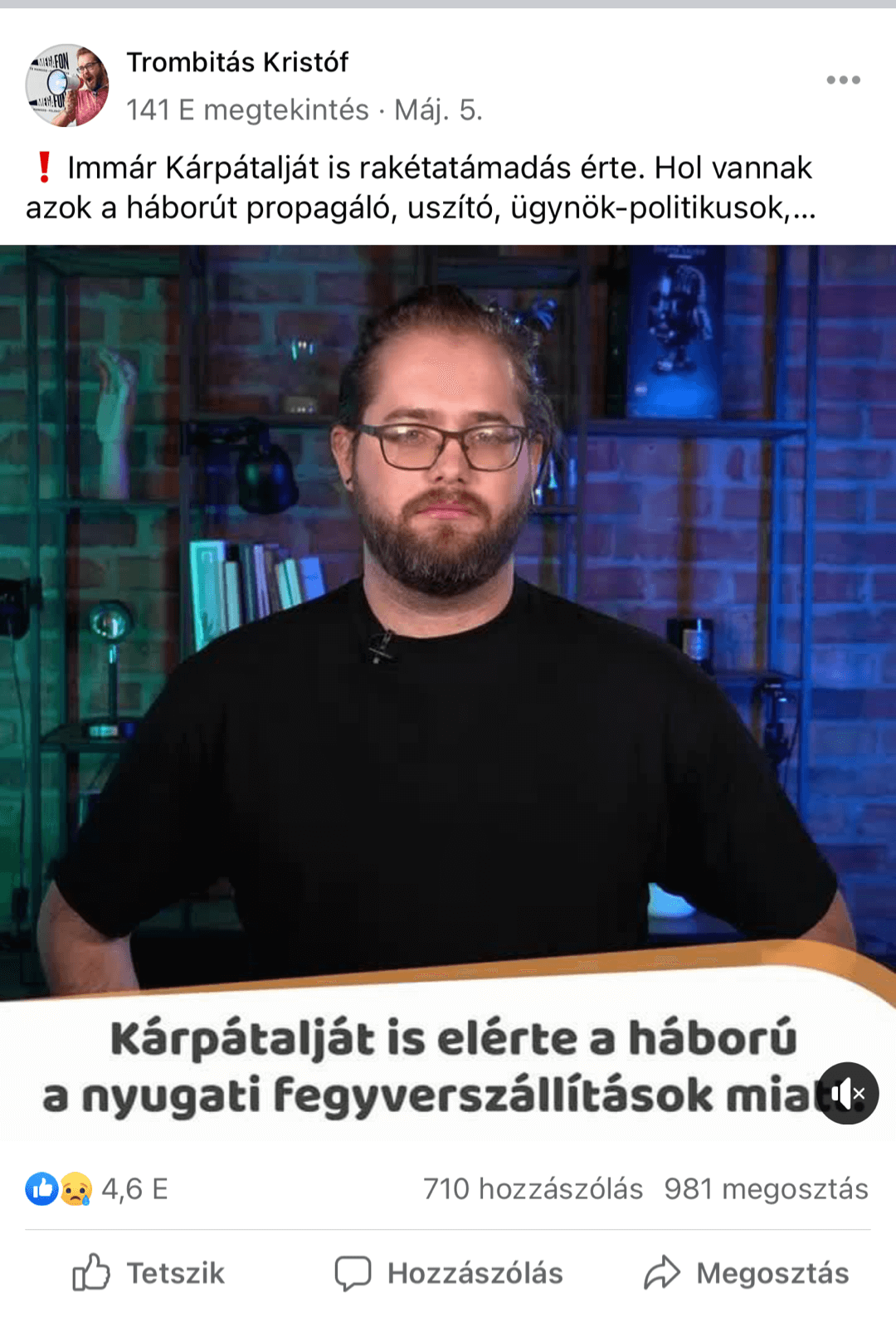 You see an article in the KESMA-owned tabloid Ripost, informing you that Hungarian-inhabited areas in Ukraine “were attacked”. The article does not tell you who conducted the attack. “Well done, they prevented the Americans from bringing heavy weapons to Ukraine” — reads an allegedly local comment from social media. In its last paragraphs, the article reminds you that this all seems to vindicate the fears of Viktor Orban who refused to deliver weapons to Ukraine in order not to “drag Hungary into the war”.

You linger a little on Ripost’s site, where you see a video, posted a day before. The title is: “What do you think about the oil embargo?” The video, with dramatic music, informs you that “Hungarian drivers are scolding Brussels”. “Brussels wants us to turn off Russian oil. But then we wouldn’t have enough fuel and its price would multiply!” — the video tells you in between interviews with annoyed drivers.

You scroll further. Daniel Deak, an analyst and familiar talking head in Fidesz’s media with a significant social media presence, approvingly shares an article in which foreign minister Szijjarto vows to “defend our economic achievements that Brussels’s oil embargo plan would ruin”.

You are filled with rage. On one hand, Hungarians’ livelihood is attacked by faceless bureaucrats in Brussels; on the other hand, Hungarians’ lives are endangered in Ukraine by… well, by those who transfer weapons through their towns and villages, clearly. It’s these people who bring the war, which would otherwise be a regrettable, but distant phenomenon, closer to you.

You get home exhausted and a little afraid of what comes next. You turn on the TV while you’re having dinner. The public broadcaster’s evening news program has just started. You catch the last moments of Orban’s radio interview, which the news program quotes at length. The program then moves on to show the public perspective — people like you — before quoting Fidesz politicians… and moving on.

You watch your evening series. It's a welcome distraction from the outside world. Afterwards, however, you keep “surfing”, as it’s too early to sleep. You linger for a while on a talk show on Hir TV, a news-focused station. Public intellectuals are interpreting the news, among them a “space researcher” who just happens to have served in Orban’s government, though this is not mentioned. Once again, you are reminded of the familiar themes of the day:

You turn off the TV and go to bed, exhausted and somewhat fearful. You are also happy that someone who thinks like you is in charge and is showing those out there who are eager to harm or just to annoy you where they should put their ideas. Another battle is won. The war rages on.

You would be right to ask the question of whether our hero could have turned on different TV channels or found different newspapers. Yes, it is possible to get your news and opinions from elsewhere in Hungary. But it is increasingly difficult. The Freedom House think tank wrote in 2022:

According to Reporters Without Borders:

“The country’s medium-sized media market is not accustomed to monetisation of content. Stable financing of independent media is threatened by the discriminatory allocation of state advertising for the benefit of pro-government outlets.”

Also, importantly the media ecosystem that Fidesz has created is closed and self-referential: various outlets and talking heads quote and refer to each other in order to support their stories while disparaging independent outlets. This grand echo chamber discourages consumers of media from seeking information outside of the ecosystem maintained by Fidesz.

This has significantly impacted the perception of the war in Hungary: In early March, a survey by the pollster Publicus suggested that Fidesz voters — who are significantly likelier to consume government-backed media — had a radically different picture of the war than opposition supporters: less than half of them recognized it as a Russian aggression while 42% expected a quick Russian victory. Another survey by the Median institute in May found that Fidesz voters were significantly more likely to have a positive view of Vladimir Putin and support closer ties with Russia, than opposition voters.